The Segregation of Public Housing and the Chicago City Council

The following post is the second in our continuing series on the Gautreaux digital archive. This series examines some important moments in the history of the Gautreaux lawsuit and considers how the case continues to influence housing policy in Chicago today. –Torsten K. Edstam, Ph.D. 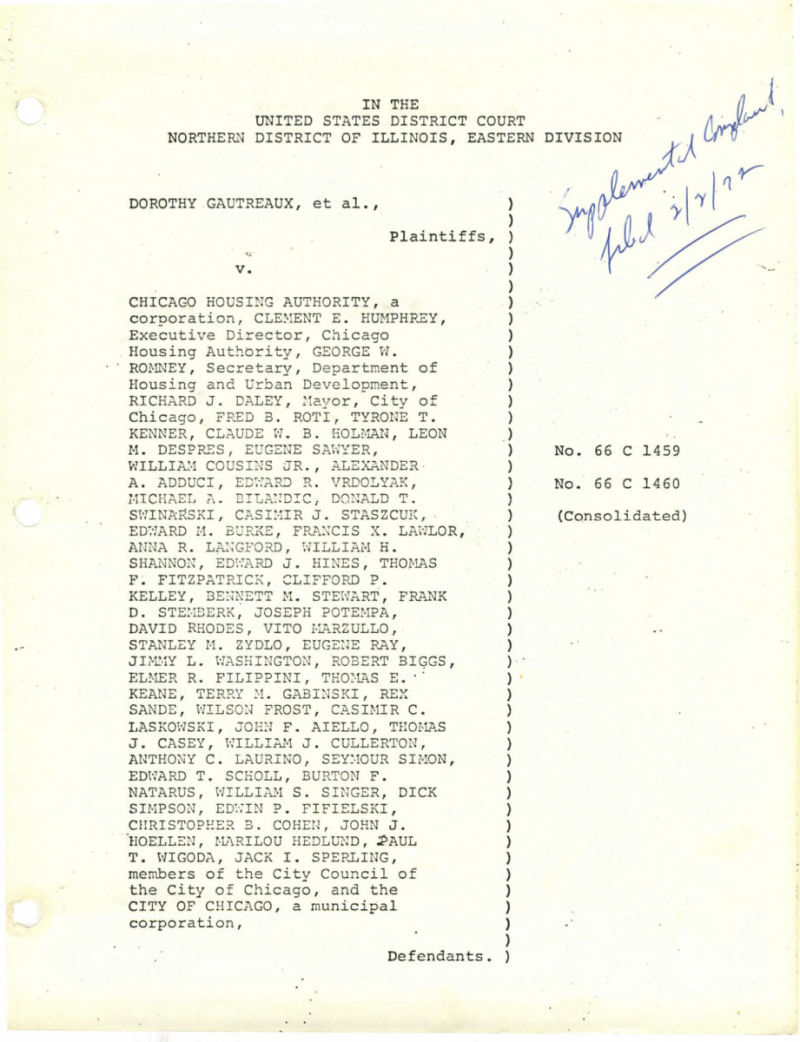 In 1938 the Chicago Housing Authority opened the city’s first public housing projects: Jane Addams Houses, Julia C. Lathrop Homes, and Trumbull Park Homes. At the time, the federal government’s so-called ‘Neighborhood Composition Rule’ dictated that these projects mirror the racial population of the communities in which they were located. Under this rule, Julia C. Lathrop Homes and Trumbull Park Homes, located in white working-class neighborhoods, housed only whites, while 26 of the 1,027 Jane Addams Houses apartments were rented to African Americans, the rest to whites. In early 1941 Ida B. Wells Homes opened with all black residents.  Although the first Executive Director of CHA, the social reformer Elizabeth Wood, sought to change this stark racial segregation, when Alexander Polikoff and his colleagues initiated the Gautreaux lawsuit. in 1966 it had become even more pervasive. Most public housing projects and almost all of the sites proposed for new construction were located in black neighborhoods.

Why did the segregation of public housing persist and intensify, and what were the consequences? As to the first question, in October 1968 Polikoff prepared a brief that outlined several reasons for CHA’s decision to select public housing sites in black neighborhoods, ranging from the ousting of Elizabeth Wood in 1954 to ongoing opposition from white neighborhood residents. The most significant cause, however, was collusion between CHA and the Chicago City Council. As Polikoff outlined in his brief, in 1955 the new Executive Director of CHA, William Kean, struck a deal with Alderman William T. Murphy, the Chairman of the City Council’s Housing and Planning Committee. According to the terms of the Kean-Murphy deal, each public housing site needed to be pre-approved by the alderman in whose ward it was located before that site would be formally submitted to the City Council for approval. Moreover, CHA agreed to submit twice as many sites as necessary, so that aldermen had readily available alternatives to placing public housing in predominantly white wards. Effectively, the City Council held veto power over CHA’s real estate purchases. Polikoff argued that this collusion meant CHA had abandoned its responsibility for making non-racial decisions about site selections and instead helped promote the segregation of public housing.

Even after judgment was rendered in favor of the Gautreaux plaintiffs, the City Council continued to hinder efforts to relieve housing segregation by blocking CHA’s attempts to acquire property for new construction. Consequently, in February 1972 Polikoff filed a supplemental complaint against the members of the City Council itself. Ultimately, the court set aside the state statute from which the Council derived its power and ordered CHA to acquire sites for public housing without the Council’s approval.

To this day, CHA property acquisition decisions are free from the need for City Council approval.  A recently proposed City ordinance would, however, interfere with that freedom. CHA critics are proposing to give the City Council and the City’s Department of Planning and Development “oversight” of many CHA activities, including aspects of site acquisition and planning, and the CHA budget.  Given the Chicago history, such City involvement in CHA activities raises serious legal and policy questions, and does not seem advisable.