Housing Mobility: What Is It and Why Is It So Controversial? – Part 1

“We are talking about the appalling fact that nearly one of every two poor African American children in this country faces a high risk of a blighted adulthood.”

Housing mobility is prominently on BPI’s current agenda. This three-part series by Alexander Polikoff, co-director of BPI’s Public Housing program, aims to provide a brief overview for interested readers. For those wishing to delve more deeply, source materials are provided at the end of each post.

Housing mobility dates to the 1976 U.S. Supreme Court decision in BPI’s Gautreaux litigation. Lower courts had found the U.S. Department of Housing and Urban Development guilty of knowingly funding racial discrimination in Chicago. The discrimination was that to prevent African Americans from entering white neighborhoods via subsidized housing, the Chicago Housing Authority was building virtually all of its thousands of public housing apartments in black neighborhoods. A unanimous Supreme Court ruled that the remedy for HUD’s wrongdoing could be metropolitan-wide and didn’t have to be confined within Chicago’s geographic boundaries.

In the wake of that ruling, rather than chance whatever remedial arrangement lower courts might order, BPI and HUD agreed on a settlement.  In 1974 Congress had enacted a new form of subsidized housing called Section 8 Certificates, later renamed Housing Choice Vouchers.  Vouchers pay a portion of a tenant’s rent in privately owned homes and apartments; instead of being confined to publicly owned housing, families with vouchers could—theoretically—move wherever they wished. For minority families in inner-city neighborhoods, however, a voucher by itself was not a ticket out of segregation.  Under the Gautreaux settlement, HUD not only supplied vouchers to Gautreaux families but also paid for search assistance and counseling. The assistance was to make it realistically possible for inner-city families to move from segregated to integrated or predominantly white neighborhoods.

Which is what happened. During the next 22 years (the agreed life of the settlement), over 7,000 families, almost all African American and very poor, were enabled to move out of segregated, inner-city Chicago.  Some moved to outlying city neighborhoods, but most moved to suburbs that were predominantly white and had far lower poverty rates than inner-city Chicago. Housing mobility—vouchers plus counseling and search assistance—was born.

Moving to the suburbs appeared to be a good thing for most of the Gautreaux families who did it. Sociologists at Northwestern University, studying the experiences of both “suburban-movers” and families who remained in the city, came up with some startling conclusions.  For example, children of suburban-movers were four times more likely than those of city-movers to finish high school, twice as likely to attend college, and far more likely to find jobs. Suburban-moving mothers were also more likely to be employed.  A social scientist in the audience at one of the Northwestern presentations said that if by moving to suburbs inner city black families could achieve the life-enhancing results being reported, policymakers should drop other initiatives and concentrate on housing mobility.

Why Didn’t Housing Mobility “Take Off”?

Given the Gautreaux program’s favorable results, why didn’t housing mobility “take off”?  Why wasn’t the Gautreaux experience transformed into national policy? There are several reasons. 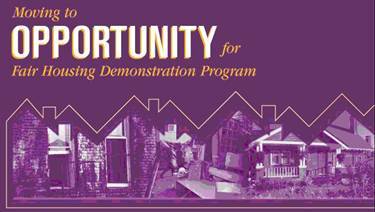 Moving to Opportunity. One was MTO—the letters stand for Moving to Opportunity—a ten-year (1994-2004) HUD demonstration designed to test Gautreaux results in which over 4,000 families in five different cities participated. When MTO was over and evaluated, its results were mixed.  Although compared to non-movers the moving families showed improvements in physical and mental health, there were no employment and educational gains beyond those experienced by the control group.

Later analyses however disclosed flaws in MTO’s structure and implementation that explained why MTO families didn’t experience Gautreaux-like results.  For example, because (unlike Gautreaux) the MTO demonstration did not employ a segregation/integration criterion for receiving neighborhoods, many MTO families moved short distances, often within the same school district, into heavily minority areas. Famed Harvard scholar William Julius Wilson concluded that MTO “tells us little about . . . the effect of neighborhood on the development of children and families” (Wilson 2010: 209). And two recent landmark studies demonstrate that neighborhoods matter a great deal in the lives of individuals, indeed across generations (Sampson 2012; Sharkey 2013). But the damage had been done, and for years conventional opinion held that MTO proved “mobility didn’t work.”

The Socio-Political Objection.  A second reason housing mobility was stillborn is the “socio-political objection.”  Fewer aspects of the American experience are more deeply ingrained than racial residential segregation, especially of African Americans. The story of how government policy (federal, state, and local) and private prejudice have combined over generations—and still combine to this day—to keep black Americans from living in white neighborhoods is an oft-told tale that will not be repeated here. (See the references at the end of this post.) Because the thrust of mobility is precisely to enable poor families of color, particularly African Americans, to move into predominantly white neighborhoods, mobility confronts directly the powerful social and political forces in American society designed to “protect” against that happening.

Privileging Place-Based Strategies. One aspect of the socio-political objection manifests as a debate between so called “place-based” strategies to improve severely distressed neighborhoods and mobility programs intended to enable families to escape from them.  Place-based strategies seek to improve conditions within distressed neighborhoods, through economic development and upgraded facilities and amenities, in order to revitalize them. These strategies do not threaten white communities with incoming black families, and they attract constituencies, such as community development corporations and private developers, with financial stakes in the programs. The combination has led to over fifty years of focus on place-based programs variously called “community development,” “neighborhood revitalization,” and the like. (Mobility, apart from enabling black families to move into white neighborhoods and lacking constituencies, is often seen as undermining place-based initiatives by facilitating the departure of motivated families from the very places to be revitalized.) Yet fifty-years of place-based revitalization policies have yielded very little durable progress and, even though many proponents of place-based initiatives agree that mobility should be a part of any strategy to improve the lives of families trapped in severely distressed neighborhoods (Goetz 2003: 237-319; Sharkey 2013: 172-179), a continuing bias in favor of place-based strategies has made it difficult for mobility to gain traction.

Gun-Shy Bureaucracy. Another aspect of the socio-political objection is that the HUD bureaucracy that sets rules for the voucher program, fearing charges of “social engineering,” is gun-shy about encouraging a program that would facilitate the movement of poor black families into white neighborhoods. Moreover, the cost savings, realized when children and their families are healthier, better educated, and less likely to need public assistance or run afoul of the criminal justice system, accrue to other agencies, not HUD.  So, with little to gain financially and risks to run politically, instead of mandating  mobility services HUD has developed rules that favor speedy issuance and use of vouchers over finding good locations. For most African American families the rules typically mean a hurried rent-up—racing against expiration of the voucher search time (usually an inadequate 90 days)—in a familiar, black-segregated, high poverty neighborhood.

Indeed, HUD rules actually incentivize administrators to shovel out newly issued vouchers as quickly as possible and shun mobility, for the latter takes more time (to find available dwellings in good neighborhoods) and costs “extra” money (for counseling, housing search assistance and higher rents in destination neighborhoods). HUD argues that because voucher funding is limited to what Congress appropriates (vouchers are not “entitlements”; there are long waiting lists), the extra costs mean that fewer families can be served. Serving fewer families is indeed HUD’s favorite reason for not fostering mobility. Why the reason is unpersuasive is explained below.

Mobility is Difficult. Finally, mobility is hard to do.  It is hard for families to move into unfamiliar, distant, sometimes hostile neighborhoods, far from familiar support networks, and it is hard to find enough landlords in white working and middle class neighborhoods willing to rent homes and apartments to families of color.  Even in a supportive environment, free of the attitudes spawned by MTO and the socio-political objection, no one really knows how much mobility would be possible in the real world of tight rental markets and racial prejudice.

The result has been that except for two mobility programs in Baltimore and Dallas operating under court orders in Gautreaux-type lawsuits, mobility is an idea whose time has not yet come.  Indeed, given the obstacles, one cannot but wonder whether it ever will.  Why then is BPI engaged in what may seem a quixotic endeavor?

History of of Housing Mobility

Sharkey, Patrick. 2013. Stuck in Place: Urban Neighborhoods and the End of Progress toward Racial Equality. Chicago: University of Chicago Press.

Wilson, William Julius. 2010. “Why Both Social Structure and Culture Matter in a Holistic Analysis of Inner-City Poverty,” The ANNALS of the American Academy of Political and Social Science 629: 200-219.

Rothstein, Richard. 2014. “The Making of Ferguson: Public Policies at the Root of its Troubles.” Washington, D.C.: Economic Policy Institute.

Rothstein, Richard and Mark Santow. 2012. “The Cost of Living Apart,” The American Prospect.

Sharkey, Patrick. 2013. Stuck in Place: Urban Neighborhoods and the End of Progress toward Racial Equality. Chicago: University of Chicago Press.