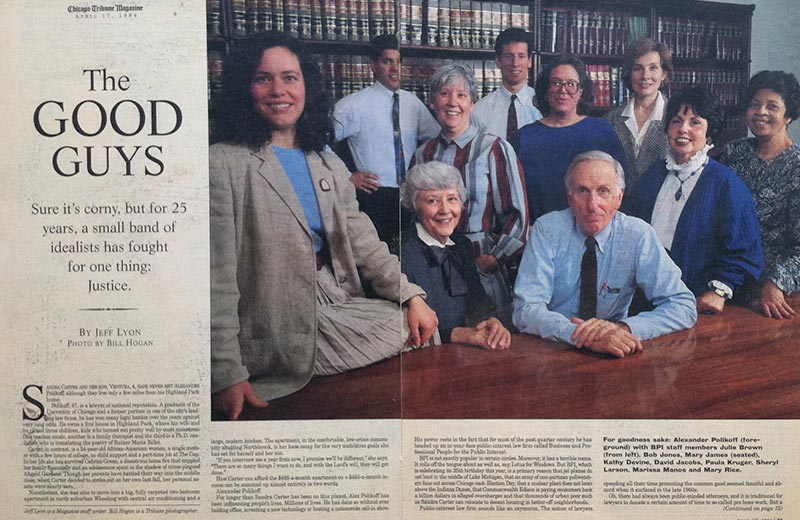 Since its first days in 1969, BPI has been at the front lines of social justice in the Chicago region. Founded by visionary corporate leader Gordon Sherman, CEO of the Midas Muffler Company to fight for the public interest “against all inequities,” BPI’s voice has never been muffled.

While our broad mission has allowed BPI to tackle a diverse array of issues over the years, our commitment to systemic change that delivers equity and increases opportunity for Chicago-region families and individuals remains true to the spirit of justice and social responsibility that motivated our founders to create BPI amid the backdrop of the civil rights movement and war in Vietnam.

Under the direction of our first Executive Director, attorney and activist Marshall Patner, BPI gained notice for a number of initiatives, including a media campaign opposing the City’s now unthinkable plan to create a new airport in Lake Michigan. The campaign’s provocative theme—”Don’t Do It in the Lake”— ignited a highly successful effort to defeat the City’s ill-conceived plan.

In 1970, Alex Polikoff joined BPI as Executive Director, bringing with him Gautreaux v. CHA, a civil rights case he had pursued on a pro-bono basis as an ACLU volunteer. Fueled by BPI’s landmark U.S. Supreme Court victory in 1976 Gautreaux became one of the leading civil rights cases of our time, improving life opportunities for thousands of public housing families and continuing to protect the rights of public housing residents around the country today.

Former BPI Board President and current Executive Director Hoy McConnell succeeded Alex in 1999, bringing not only his executive management and leadership acumen honed over a long professional career in advertising, but a deep engagement in BPI’s issues acquired through many years of service as a BPI Board member.

Guided by Rev. Martin Luther King, Jr.’s statement—“The arc of the moral universe is long, but it bends towards justice”—BPI recently adopted a new themeline, “For a Just Society.” Those four words succinctly sum up our history of advocacy and action for social justice—just as they define our future.

Proceeding from the most recent back through BPI history, the milestones listed here provide a roadmap through the many-layered terrain of BPI’s public interest law and policy work over the last 50 years: public and affordable housing, education reform, environmental action, civil rights, political reform issues…the list is long and the scope is broad.

Recipient of the MacArthur Award for Creative and Effective Institutions